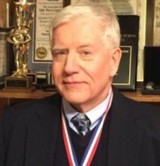 For more than 20 years, Dr. Dale Layman has been fighting for a cause he says is often overlooked by others. A longtime champion of human rights, Dr. Layman is staunchly opposed to the rise of robotics. He warns against a world that seeks dependency on robots, wondering:

“Can we as humans process information like computers without always using them?”

His organization, Robowatch, LLC, is led with the intention of protecting the jobs of people and the future of mankind. As Dr. Layman explains, organic life should not become further threatened by the encroachment of artificial intelligence. His introduction to the threat of artificial intelligence was prompted after reading a series of scientific articles in 1999. Over the years his concern grew, and it was not long before Robowatch was born. In 2003, Dr. Layman wrote the Foreword to Stan Gibilisco’s book, “Concise Encyclopedia of Robotics.” Since then, he has become a dedicated member of the community informing the general populace about the hyper development of technology and the corresponding implications.