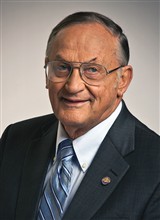 Thomas W. Bertz is a retired attorney who, for 51 years, served as a personal injury advocate in the courtroom and a compassionate professional in his interactions with his clients. Before concluding his career as a partner of Anderson O’Brien Law Firm in Stevens Point, Wis., he successfully represented victims in products liability cases against some of the largest manufacturers in the United States. He also handled matters involving malpractice, slip and falls, auto accidents, toxic tort, workers’ compensation and all other types of personal injury, notably trying more than 100 civil cases in his career. “When someone is injured due to the negligence of another person, the damage can be life-altering,” Mr. Bertz says, adding that he has always fought for his clients to receive the justice they deserve. In recognition of his professional excellence, Mr. Bertz was named a Super Lawyer in 2008, 2009 and 2010. He also holds an AV® Preeminent™ Rating from Martindale-Hubbell® and was named as one of the Top Attorneys in Wisconsin.